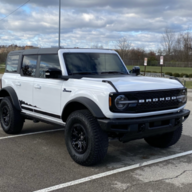 Because you can’t get a roof rack on a 4door Bronco with the 2.7 engine.
Advertisement
Wildtrak | Oxford White | 4 Door | Lux | Leather | HD Bumper | Bash Plates | Side Graphics
Build Thread: https://www.bronco6g.com/forum/threads/black-ice-build.17693/​

We also have a Kona Blue Mustang, and have viewed AMB on an F-150 in person.

The Kona is a relatively dark blue. AMB is black, except where strong incident light is causing the metalflake layer to reflect a blue hue. And the reflected blue portion of AMB is not the same as Kona Blue.

Edit to add: AMB is 99% likely to be our choice, mostly as the lesser of all the evils. We'd love to have Lightning Blue or Kona Blue.
Last edited: Nov 2, 2020 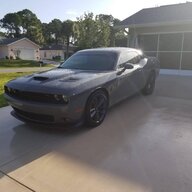 Macfamm said:
Just to correct the record... the Rubicon Recon came with 255/75r17's (you can blow up this photo and see the tire size) which is the same 32" diameter "made for the Rubicon" BFG Mud T/A that came on every other JK Rubicon. Apparently Jake Holmes should stick to writing about Bentley's and Bimmers!
Click to expand...

Canyonero02 said:
Jeep has never offered a 35 from the factory on a wrangler.
Click to expand...

I found the right model with stock 35s from the factory. 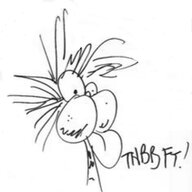 Jmtoast said:
Snapped this on 96 near Detroit Nice to see that the handles and wheel flares are black.......I hope they keep that and don't go with grey like some other pictures shown. 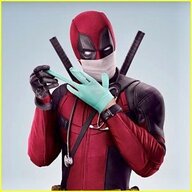 fly-cobra32 said:
Nice to see that the handles and wheel flares are black.......I hope they keep that and don't go with grey like some other pictures shown.
Click to expand...

Think the flares are still grey. It's the lighting.

maybe somebody can clear this up for me.

The overlanding rig we saw had 35s but looked very low to the ground. This looks much better. The pictures on B&P tool don’t lift up the vehicle when you add Sasquatch.

what are we to believe here??

Thanks for the input LEGEND. BroncoGuy works for the top-maker...said that MIC material has a very short shelf life before final forming - so there is not a warehouse full of it sitting at parade rest. He also said the color formulation is easily changeable.

By your comment of "still a work in progress" are you saying the shade of MIC-top grey in that antimatter bronco is not final?? Also, don't know if you saw the holloween bronco pic on the forum...would you say the MIC top here is current shade? 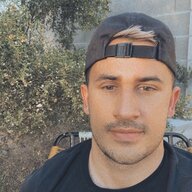 Damn baby, you fine as hell. 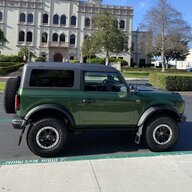 vintage said:
I have to admit the Gray MIC is starting to grow on me. I think it looks nice with the dark blue body.
Click to expand...

Same here--at first I thought the gray top looked terrible with AMB, but after looking at tons of pics, I've changed my mind. And it's nice that the top appears to match the fender flares fairly well. 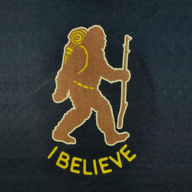 Jmtoast said:
Snapped this on 96 near Detroit

Nice looking Bronco, but don't those look more like 33" AT tires?