Built Bronco Badlands vs Wrangler Rubicon Side by Side Look 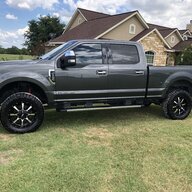 conrfox said:
Awesome picture by @justinbmcbride showing the Bronco Overland Rig vs Jeep JL Wrangler side by side!

Can’t wait to see this competition on the road. 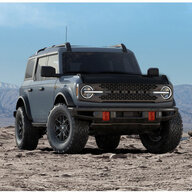 I some sort of weird bias against them. It's like they're always stuck in the 1980's for some reason.

Maybe it's just watching reruns of M.A.S.H. when I was a kid. I just never got the appeal.

Now Land Cruisers and FJs appealed to me more because they seemed more romantic out adventuring in the desert or the jungle.

I own a Wrangler and can't wait till I get my Bronco and leave the Jeep!

Jeep is simply too narrow inside, though I'm a skinny man, I feel confined inside.

Also, with so many Jeeps I am tired of the waving - so done with some community obligation I have to pay attention for while driving. Bye bye jeep. 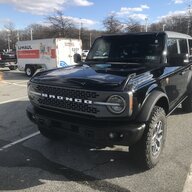 Justin's video is up 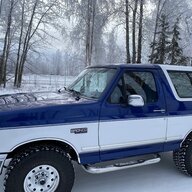 BroncoNV said:
Actually I was wrong, there was a SAS Bronco on the Rubicon but there wasn't a video of it (so partially correct): https://www.autoevolution.com/news/...-ford-bronco-rubicon-trail-action-147053.html

"For now, the rock crawling action includes just two of the three examples. It involves a 4-door in Badlands trim with the new 7-speed manual transmission, optional 33-inch tires, and Ford Performance beadlock wheels with rings.

The 2-door is also a Badlands but with the auto transmission, BF tires instead of Goodyear on the 33-inch wheels, and a Ford Performance steel modular front bumper. The one missing is the 4-door with the Sasquatch Package. "
Click to expand...

I know it's a typo, but trying to imagine "33-inch wheels", that would be a sight to see. Just don't think I'd like it. too funny 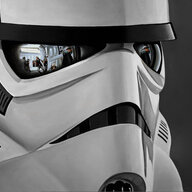 - Bronco needs a lift.
- Jeep does look dated but that's the thing about Jeeps.

That Jeep does look good though. i'm a fan of the fifteen52 wheels and the the lift is perfect. watching the walk around shortly. thanks justin.

8:48 on the video, that front camera view is ruined by the winch placement. Either Ford or the aftermarket is going to have to figure that one out.

ColoradoGuy said:
Don't mean to insult anyone that has a Wrangler but the Bronco makes it look very dated.
Click to expand...

I don't think you're going to hurt anyone's feelings on here...

Nice video way better production than any bronco nation crap. Worth the wait

I know, they just slapped the 35s without the Sas pack right? 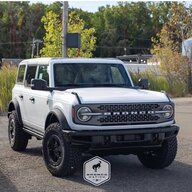 Justin said in video that this bronco had sasquatch because it had lockers. Compared to other Sasquatch bronco's this one looks way lower and less fender clearence. BFG's might run larger than Goodyear, but I've known them to run small in past. A 35' BFG is nomally 34.?" nor 35". I'm thinking this is a regular Badlands with after market wheels and tires, so it is missing he 1.2" sasqutch lift.
I think another video mentioned the same so it seems more likely.
--
2019 Ford F-150 Raptor
2022 Ford Bronco Badlands (Waiting to order, res in 7/14/20)

Bronco still looks awesome, and I know that people will give me a bunch of crap for saying it, but that jeep looks straight up bad-ass too. Honestly, I love the competition because both vehicles will only get better. Look forward to seeing the direction they both go for next gens after the release of the 6th gen. Bronco. 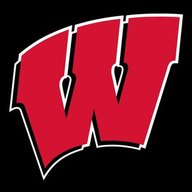 The reason the Jeep looks dated is because Jeepers demand it. You might say Coca-Cola is a dated taste, but as Coke learned when it self-admitted to “the most memorable marketing blunder ever” and screwed with its 100 year old original recipe by substituting New Coke, and which almost cost it the company, do not underestimate loyal customers’ emotional attachment to the brand. Jeep, fortunately, has been a bit smarter (except maybe for those square headlights) and closely gauges customer reactions to proposed model changes with market research. It’s why Jeep rolls out concept vehicles at auto shows and off-road events; it allows it to monitor its customer base’s response and adjust, accordingly. Jeep staff read the blogs, follow the forums, and pay close attention to what customers want and what they do with their vehicles. It’s what led to the creation of the Rubicon in 2003. Having owned eight Jeeps, seven of which were Wrangler style (there’s an M38A1 and a CJ-5 in there), I want the continuous improvements and upgrades, but I still want the seven-slot grille, round headlights, and the unmistakable Jeep shape. To those that find the Wrangler “dated,” I am willing to bet few are actually Jeep owners. How many vehicles can trace their ancestral roots directly to victories on the battlefields of one of the greatest wars in American history? The Wrangler is a daily reminder of that proud legacy. The Jeep community is alive and well and growing leaps and bounds every day.

Having said all of that, I very much like the new Bronco. As I said on this Forum months ago, Ford will have to build a “clear and convincing winner,” and more than just a Ford version of the Wrangler to compete. I believe they just may have done that. It looks to be a very formidable foe for the Wrangler and I am delighted that Jeep finally has competition. As much as I like my current (three) Jeeps, they all suffer from various quality-control issues. And my latest Jeep had an MSRP of $53,000; making it both expensive and more difficult to justify taking off road (I have a TJ to do that, fortunately). [I even see some consternation among Forum members here about taking a $60k+ vehicle offroad and beating it up.] I want Jeep to focus on quality and build a better product, as well as slow down the rapid advance of higher and higher prices. Competition will help and, IMHO, the Bronco introduction has already led to the Wrangler Hemi concept and the introduction of the 4xe hybrid Jeep. This is good for everyone.

Having owned or driven nearly ten Ford vehicles, including my current ’19 Ranger, I like where Ford is going and what they have been turning out. My Ranger with the 2.3L runs just great and I have no complaints; I suspect the 2.3 and the 2.7 in the Bronco will please 90+% of Bronco owners. The Bronco is a good looking vehicle, appears to be well-thought out, and well-supported within Ford, not to mention the 200+ accessories, upgrades, and other after-market products on the way. Too early to say, but if the reservations are any indication, Ford has a huge hit on its hands. It may be my next vehicle or maybe not, but I am cheering for its absolute success because I like off-road vehicles in general and it will force all competitors to improve. And future Bronco owners should be cheering Jeep on, so that if the tables are turned, Jeep will be nipping at Ford’s heels to keep the Bronco up-to-date and competitive.
Last edited: Oct 31, 2020
Advertisement
You must log in or register to reply here.
Share:
Facebook Twitter Reddit Email Link