GotNotch said:
I am taking the cheap thing off as soon as I get the Bronco home.
Click to expand...

Spent over 50K and Ford places a plastic coated sticker on your vehicle. This doesn't scream quality. 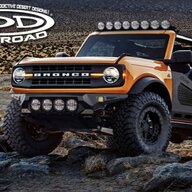 This was an image from one of the early pre-production Bronco Sports. It was believed they would have different badges, but all the other Badlands Bronco Sports have the same as Big Bronco....looks like they tried to keep the skull, and you can almost make out the negative of the horns in the open space above the cliffs.

A bit of me was hoping the skull and horns would reflect out as a single unit from a certain angle. I won't lie, would've given Ford some kudos for that.

👣 First Look at Sasquatch Badge for Base Bronco!
5 6 7