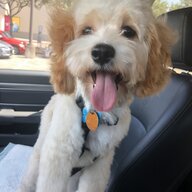 Standard bumper.
Temporary fix(Velcro) as I'm awaiting for the long awaited bracket from Builtright.
I used the heavy duty 15# strips. The plate is a lot larger than the bumper area. I also bolted it to the frame to make it seem as if it's bolted on.
Yes, you can see my Texas license number as well as everyone that drives by. The secret is out! 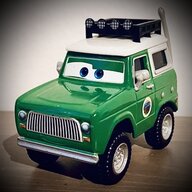 My wife has a Tesla and most Tesla owners don't want the stick on front license plate holder. I purchased a 3-D printed one that attaches to the front air intake and looks better. That said in a lot of states including mine (Colorado) front plate is required. We have been pulled over 3 times for the sole reason of the officer trying to nail us on this. As well I know of several people that had add on citations to speeding tickets.
[o-3BRUNO-o] 2DR, 2.3L, BL, No SaS, Mid, Erupt Grn, Tow....waiting '20, '21, '22, ‘23 +2500

I have the clear plates covers, actually I think one of mine are tinted And so far haven't had any issues. I've even got a traffic cam ticket before... It had no problem taking a picture of my license plate through the plastic cover.

I put them on to deter people from stealing my license plates... Personally I'm not sure what I'm going to do about the Bronco. Probably find a way to mount the front plate without drilling holes and call it a day just to not draw any extra attention. 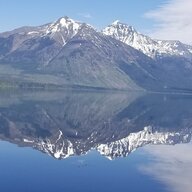 I have been ticketed and in another case it was the reason I was pulled over. At the time in Oregon it was a fix it ticket. Put the plate on and judge would dismiss the ticket. Not anymore. Now it is a $200 fine. Also if you are parked on a public street with no front plate you will be ticketed.

Kameronatm said:
Has anyone actually received a ticket for not having the front plate? I am sure there are exceptions but I have never heard of anyone receiving a ticket solely for not having a front plate. I did get a warning once while pulled over for speeding. Just trying to figure out if its worth it to figure out a relocate on the new capable bumper or store it in the glove box. I think the plate jerry rigged on the front looks awful and I don't want to drill the new capable bumper.
Click to expand... 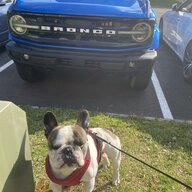 Contact said:
Standard bumper.
Temporary fix(Velcro) as I'm awaiting for the long awaited bracket from Builtright.
I used the heavy duty 15# strips. The plate is a lot larger than the bumper area. I also bolted it to the frame to make it seem as if it's bolted on.
Yes, you can see my Texas license number as well as everyone that drives by. The secret is out!

This is an excellent idea and looks great. Might have to use this since I’d rather not drill holes in the standard bumper.

IDyeti said:
I have, numerous times while parked. Don't park in downtown Denver on the street without a front license plate mounted below 26" (IIRC). Lost my front plate while wheeling due to a shitty mount (ahem KR Offroad), parked on Monday and ticketed. New license plate received and put in windshield, parked, ticketed again. Cause I wanted an explanation so I parked again but waited for the cop who proceeded to break out a measuring tape, give me an explanation, and another ticket. It wasn't for improperly mounted it was for the height issue.

So I display a front license plate and happy Idaho doesn't have some stupid 26" crap. What mount is this? I love this location but don’t recall seeing a mount on the market that places it here specifically. 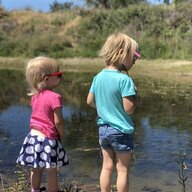 blsbikes2 said:
I used to live in a 2 plate state (NY) and got pulled over and ticketed for no front plate on my stock 2008 Mustang Bullitt. The trooper obviously just wanted to look at the ride based on the questions asked. told me to get the plate put on and they would drop the fine. I still hate him for making me drill holes in the bumper.
Click to expand... 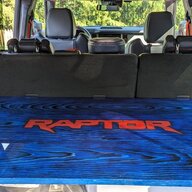 Here in New Yorkistan you best believe you will get ticketed for that and more - tinted windows, aftermarket exhaust, loud radio etc.
Me = Johnny Mo
NOT me = Johnnymo 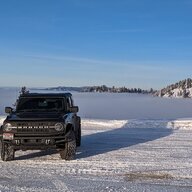 ethanax said:
What mount is this? I love this location but don’t recall seeing a mount on the market that places it here specifically.
Click to expand... 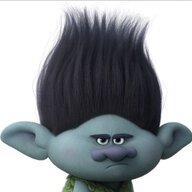 MyWifesNameIsHonda said:
All the time in NYC. From cops, NYC park police, NYC traffic enforcement(parking-meter maids). I just run a front plate On my Camaro because I was getting so many tickets
Click to expand...

Same - either in the city or coming out of JFK.... And it's not cheap! I folded and put the plate on when I head into the city from CT 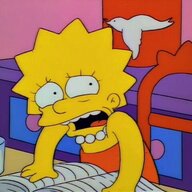 Mercury pulled over twice in Wisconsin (once being a bored cop) for no front plate.
Flex has never been pulled over.

Not putting a plate on the Bronco.

Yes to the ticket. In Oregon it used to be a "fix it" ticket. Go to court and show a photo with the front plate installed and they would toss the ticket. Not anymore. No plate, you are paying the fine.

Ha! I think you could mass produce your little DIY project and make some cash. This location avoids the winch and doesn’t block the fog lights. 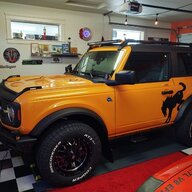 OregonHighlander said:
It happens. As a former LEO I can tell you that in States requiring front plates....it is PC-probably cause to stop your vehicle. Why deal with that, the potential problems it can cause, many LEO's then use it to fish for something more. Some will be cool and write you a warning (but that is then in the computer, the next time you get stopped...a likely ticket). Some traffic officers have their "go to" or "pet peeve" citations. I knew some that this was their violation to look for and would write hundreds of citations for them. Me...I will comply and have ordered my own front plate location bracket. The OEM location sucks.
Click to expand...