ZackDanger said:
You’re not actually sending text messages with “Subject” lines, are you?!

Ha ha. But do you know what's cool about subject lines? They show up as bold, so it's an easy way to get bold text in a message. (Don't use subject lines forAndroid phones, because they don't understand them. Also, you have to have at least one character/emoji in the text field or the subject line isn't bolded.)
Advertisement
VIN: 1FMDE5CP7MLA27270

North7 said:
So I visited a local dealer today to look at the Bronco Sport, as I talked to the Bronco Specialist, of course discussing Bronco6g and Ford. He was telling me about a recent call they had with their Ford rep, he makes an off hand remark that Ford has 500,000 reservations ?
Click to expand...

After thinking about it a bit, and seeing the post where someone has a reservation number in the 500s, I can see a scenario where Ford would want to under-report reservations.

If you knew in August or October that your reservations was 250,000 or 350,000 down the list, how many of you would have placed a reservation then? At 500,000, even with a low conversion rate, you're looking at a 2023 MY Bronco. Nobody wants to hang around that long, and Ford wouldn't want people to think it might take that long since they really don't know what the conversion rate will be (and, ironically, it would be a lot lower if people thought they were much further down the list). Better to keep the numbers low until after the order deadline. Then use the actual number of orders placed to "calculate" how many reservations they actually had.
VIN: 1FMDE5CP7MLA27270 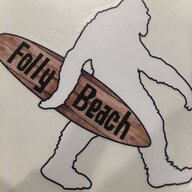 pan-y-cerveza said:
Ha....trying to extrapolate anything from this is futile anyway....but Youtube view counts aren't exact.

If you go find a few low-count youtube videos you will see a number of them that are stuck at exactly 171 views as well. Seems it is sort of a default view count.
Click to expand...

Thanks- I did notice that in the two week time frame it was 112. Just threw out there.

[email protected] said:
The sport will sell well and be a great vehicle but the reservations on that unit are a fraction of the Bronco 2 Dr and 4 Dr.
Click to expand...

Can't we just start calling it what it is? I mean "Bronco 2dr and 4dr" is so long and clunky. Let's just call it the "real Bronco" 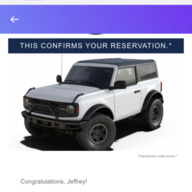 jdogi said:
Can't we just start calling it what it is? I mean "Bronco 2dr and 4dr" is so long and clunky. Let's just call it the "real Bronco"
Click to expand...

I saw an article that stated Ford expects the Sport will outsell the real Bronco.
OP
OP

Bronc-O said:
I saw an article that stated Ford expects the Sport will outsell the real Bronco.
Click to expand...

I wasn't too confident either.

Mainerunr said:
Cannot be, some of you have 500k builds alone. Heck, I don't have a reservation and I've probably gone through 100 builds.
Click to expand...

Since Bronco is a truck frame, does it count towards Ford's truck sales numbers?
2 3