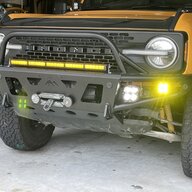 I admit I have zero wheeling experience, but I have scratched my head when I’ve seen people “stationary in mud” floor it until they dig an axl-deep trench.
Any 201 recommendations for mud, other than “don’t get in that situation?

L8apex said:
An Introduction to Traction.

This is a 100-level introduction into traction and hopefully it can provide some insight and benefit for even experienced drivers on or off the trail. Most of the examples will be simplified but they will be representative. There’s lots of things that go into getting traction – temperature, humidity, surface type, tire compound, and much more. So, let’s begin from the beginning.

In its simplest definition, friction is the force that resists relative motion. You try to slide a box across rough pavement, you’ll be met with a lot more force than if you slid a box across a waxed linoleum floor. That’s friction at work.

For this discussion we’ll only be considering what is known as dry friction as it’s best for approximating a tire and a surface in good contact.

Let’s look at our box example. Our force pushing down is simply the weight of the box. Recall Newton’s laws of motion from elementary science – force equals mass times acceleration. Looking at our forces in X we can see that if the push force is ever greater than the friction force the box will slide and accelerate to the right. If we look up a value for our coefficient of friction, μ, you’ll see tons of tables for various surfaces interacting, temperature ranges, wet / dry, but most importantly you’ll see two columns – Static Friction and Kinetic Friction.

So which do we use?

Well the answer for the box equation is both. You would use the static coefficient up UNTIL the box is in motion. From there you would use the kinetic friction coefficient. The importance of this is that the static coefficient of friction is ALMOST always greater than the kinetic. Meaning it requires more force to start the box sliding than it does to keep the box sliding – something you’ve probably experienced but never really thought too much about. So what does this mean for wheeling your rig?

Before we delve into wheeling / friction and which coefficient to use we first have to understand something known as the no-slip condition. The no-slip condition means the velocity of the tire, where it makes contact is actually 0MPH. It can be weird to think about – but let it sink in - Your tire, as it travels down the road, is moving at 0MPH AT the point of contact.

Slipping, however, is simply when that point of contact does have motion relative to the ground. We know the static coefficient is greater than the kinetic coefficient. So, for the same vehicle, in the same conditions, we get MUCH more grip if we’re not slipping. When wheeling this gives you a huge advantage if you’re able to CRAWL obstacles versus doing burnouts.

If you watch experienced wheelers, Kevin from Litebrite is very good at this, he will always attempt to crawl an object first. You’ll see others who like to mash the skinny pedal – one is being smart with their grip, the other is asking for things to go pear shaped.

So lets look at the forces acting on our wheel/tire. I’ve cut away the vehicle and just focusing on one wheel.

On flat ground it’s pretty simple. The torque transferred from the axles causes rotation, the weight acting through that wheel creates a friction force – and that friction force is what actually pushes the vehicle forward.

On a hill or angle – well things get a little more complicated. Notice now our normal force is much smaller – meaning our corresponding friction force is much smaller. That should be pretty intuitive to anyone who’s watched people wheel. But it highlights that your friction, more importantly, your normal force is not a constant. It will change with loading, angle, vehicle, etc. BUT the important corollary to that is IF it were possible to generate INFINITE Normal force we could have INFINITE friction and climb anything! We want grip - so let’s create some more normal force. We could just make our rig heavier – but that comes with a lot of unwanted negative concessions. It also goes against “tread lightly” – which the Bronco and most modern rigs are already pushing that envelope. Side note: the 9000lb Hummer EV will probably be great at crawling because of it’s weight.

Race cars use aerodynamics to push the car into the ground to generate more normal force – unfortunately this is unavailable to wheelers because the speeds are too low for air to be effective. This is where it becomes useful to understand the circle of grip.

The circle of grip is an everchanging “circle” that represents the maximum friction force a wheel can experience in any direction at any point in time. Basically it’s a function of tire characteristics and the normal force the vehicle is experiencing. See below for a few examples. The circle, in actuality, is more of an oval, because tires tend to not have as great of grip side-to-side as they do in the rotational direction, but for this example we’ll keep them circles.

The circle of grip explained further.

I know I said earlier it’s best to crawl every obstacle for maximum grip – but sometimes that’s not enough. Sometimes a little momentum is needed to carry us over an obstacle, often referred to as a “bump”. Even then we can maximize a bump to make it over obstacles we would otherwise have been unable.


As he makes it on to the first ledge you can hear him ever so slightly back out of the throttle. Kevin tries to explain it by saying he’s letting the car settle – and he is. But what’s really going on is as the vehicle compresses those shocks the normal force is increasing BEYOND the weight of the car – meaning our circle of grip is also increasing. If Loren were to have WOTed when the suspension was fully extended, he would have simply continued to spin the tires and probably have slid off the obstacle. However, by allowing it to compress he uses his bump efficiently, maximizing his friction and continues to just walk up the ledge.

This post has gotten a little long – but hope you appreciate it and gives you something to think about next time at the track or wheeling your rig.

Stay safe and keep the shiny side up.
Click to expand...

Great, great addition to the site. We need more resources like this if we want to get more people thinking about going off-pavement and out where these rigs are supposed to shine! Thank you for taking the time to put this together! 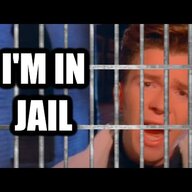 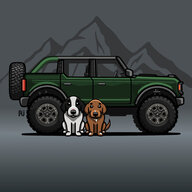 Would love to see an engineering write up on tire treads: All-terrain vs. Moutain. Maybe how different tread patterns relate to grip and friction in different ground surfaces!

The trade off in mud is that it will pack into the tread and turn your tire into a slick. People spin the tires to literally fling the mud off the tires to clean them so they can get a bite into the surface.
Certainly there is a balancing act between getting the tires clean or digging to China.

We want grip - so let’s create some more normal force. We could just make our rig heavier – but that comes with a lot of unwanted negative concessions. It also goes against “tread lightly” – which the Bronco and most modern rigs are already pushing that envelope. Side note: the 9000lb Hummer EV will probably be great at crawling because of it’s weight.
Click to expand...

It's been a while since my last physics class, but I think this part is incorrect. My understanding is that at this theoretical level, an object's mass shouldn't impact anything. Practically: The object has more friction force up the slope, but a greater weight down the slope. Mathematically: As the 'm' term increases, Ff increases, but mg*sin(theta) increases at the same rate.

You can re-arrange the equation to find the steepest slope the wheel will stick to, regardless of the wheel's mass. 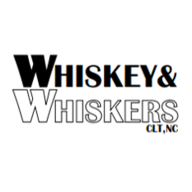 Dudeguy said:
It's been a while since my last physics class, but I think this part is incorrect. My understanding is that at this theoretical level, an object's mass shouldn't impact anything. Practically: The object has more friction force up the slope, but a greater weight down the slope. Mathematically: As the 'm' term increases, Ff increases, but mg*sin(theta) increases at the same rate.
Click to expand...

Couple things Fd = Ff is the unique case where acceleration equals 0, not impending slip down the hill. So we're either at constant velocity or at 0 velocity.

Fd < Ff is accelerating up the hill if the no-slip condition is maintained.

Now - you're right we can eliminate the m*g term if & only if the normal force is only coming from the mass of the vehicle. Which is why the next paragraphs discuss downforce and using the spring compression to increase normal force.

AND mg*sin(theta) and mg*cos(theta) are non-linear functions and definitely do NOT increase at the same rate. For most small angles <5degrees (8.7% grade), a small angle approximation wouldn't be terrible. cos(theta) = 1, sin(theta)=0.
I spent half my money on booze, women, and cars...The other half I just wasted.

Point taken regarding acceleration up the slope, I was reducing it down to a box on a slope, or in our case, a wheel with the brakes applied on a slope.

My main contention was that at this theoretical level, adding weight (like a 9000 lb hummer) won't give you more grip, because if you increase 'm' the force up the slope and the force down the slope increase by the same ammount.
Last edited: Aug 9, 2021
Advertisement
You must log in or register to reply here.
Share:
Facebook Twitter Reddit Email Link

OFF ROADING AFTER HIP REPLACEMENT

Off Roading Parks near SE PA