A most recent report from a Ford dealership suggests that the long-anticipated 2021 Ford Bronco will offer a choice of manual or automatic transmissions, and it will roll on 33-inch off-road tires with 17-inch wheels. It appears that Ford has the Jeep Wrangler squarely in its sights with the new Bronco....

This report comes from a TFLcar viewer after a conversation with a local Ford dealer. Ford does not officially comment on future products, so we must take this information with a grain of salt until Ford releases details on its own.

All the information we have so far suggests that the new Bronco will have a retro-inspired rugged design and many unique features as well. The news here is another report that the Ford Ranger-based Bronco will be offered with a manual transmission, as well as an automatic.

We expect the big Bronco (aka. “full-size Bronco”) to be offered with at least a 2.3-liter EcoBoost I-4 engine and a 10-speed automatic. The Jeep Wrangler is currently offered with a 6-speed manual transmission, so Ford may be wanting to offer this option to square off against its rival.

Another piece of news is that the Bronco will have 33-inch off-road tires. Again, this compares directly against the wheel/tires available on the Wrangler Rubicon.

Administrator said:
"This report comes from a TFLcar viewer after a conversation with a local Ford dealer."
Click to expand...

It's basic enough information that its probably true though, even if the source is bogus. Tire size is kind of a given, we've seen those on mules. The manual transmission has been known for a while, but not explicitly stated by Ford that the MT88 was going into the Bronco.

And they call it “full size”. What crappy journalism.

Toyhoarder said:
And they call it “full size”. What crappy journalism.
Click to expand...

Oh man now the rumors and misinformation parade are going to form into a riot. @Nickp and @Midnight Blue heads are going to explode. :surprised:

This is exactly the kind of thing I was talking about with TFL and other media outlets. It's not us here that throw the information and rumor train off track it's sloppy media outlets.

Ford needs to start making some real statements soon because this stuff if inevitable when you say nothing.

Awesome! We are getting the FSB

But will Ford offer the coyote?!!

BroncoRevital said:
... It's not us here that throw the information and rumor train off track it's sloppy media outlets.....
Click to expand... @Stampede.Offroad haha. I meant us talking about things but yeah this is at least the second time this site has done this. Definitely guilty as well.

I don't remember who posted these extrapolated dimensions...but I'm curious if the group still thinks they hold true? Ballpark. We don't know what the sheet metal looks like or where the bumpers are, so most of the angles are quite speculative.

The mules suggest 96" and 112" for wheelbases, but we don't know which parts are mule and which belong to the Bronco ... so we don't really know anything beyond the most vague details.

It will be shorter than a long bed pickup and longer than a unicycle. :facepalm: 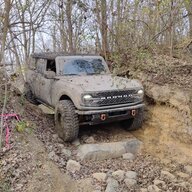 NMBronco said:
The TFL guys are so clueless. The only reason I pay any attention to them is because they do some interesting tests and comparisons (primarily their "Ike Gauntlet" tests). I cringe quite a bit watching their videos though because it is apparent they don't really know that much about the trucks they are testing, and they are horrible off road drivers.

Also, this is pretty ancient news they are trying to pass off as "breaking." Jalopnik first reported on the Getrag 6/7MTI550 AKA MT88 almost a year ago now, and Carmaker1 confirmed the Getrag manual back in February on this very forum. The 285/70/17 BFGoodrich AT KO2 tires were apparent in some of the very first sets of spy shots of the "Franken Ranger" test mule. I posted the tire size from the spy shots back in March Spied: possible Bronco mule seen testing in Detroit.
Click to expand...

Agreed, Ironically they are my "favorite" review channel but that is largely because they seem to be the best at getting a lot of vehicles of various types and getting answers that I am generally interested in. And like you said, they run a lot of tests back to back with some element of consistency/comparison which is nice. As for technical analysis/interpretation omg its a cringe fest. They are characters though, and who knows, Tommy seems to know his stuff the best out of the group so things should only get better the more he is involved. The canadian dude they have doing a lot of the offroad stuff now is a breath of fresh air too since he seems to have a vision for offroad bench mark testing and comparison with better analysis than the team ever provided in the past.
4-door Badlands, 2.3 Manual, High pkg, MGV, MIC + roof rack, no-SAS