Is there a big difference in the 2.3 and 2.7 with Sasquatch Package?

BaseSquatch said:
As someone who owns both a 2.3L and a 2.7L Bronco, you will not notice any difference in performance unless you’re on a steep incline (especially if you are using premium gas). It’s only a 30HP difference. And the extra 90lb-ft of torque doesn’t mean much, when you’re dealing with these kinds of turbos.

In the case of the Bronco, gear ratios are more important than the engine. If you want to use 35s, then get Sasquatch included from the factory. My 2.3L Sasquatch Bronco is faster than my buddy’s 2.7L Big Bend, because he upgraded to aftermarket 35s himself, without regearing.

You’ll have fantastic power no matter which engine you choose, as long as your mindful of the gearing. I plan on putting out some videos in the future, to better explain this.
Click to expand...


How is the 2.3l Sasquatch accelerating uphill on the interstate in the mountains at speeds of 65mph to 75mph? Is there plenty of uphill passing power at elevation?
Advertisement 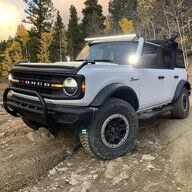 lenitech said:
How is the 2.3l Sasquatch accelerating uphill on the interstate in the mountains at speeds of 65mph to 75mph? Is there plenty of uphill passing power at elevation?
Click to expand...

Going up steep inclines is the only time I notice the performance difference between the 2.3L and the 2.7L. Both engines have plenty of power to get the job done, but the 2.3L just has to work a little harder. Passing is never an issue, no matter the situation.

The good thing about these turbos, is that there’s minimal power loss at high elevation (if any).
I have a stalker named @coolewie54,
and a hater named @De Brus

brian_ssm said:
interesting comment. so since it was in an article its automatically the truth and not the hundreds of owner reviews? You know an article is just one guys opinion right?
To each their own man, it's all relative and their is no 'correct' opinion. It all depends on how your using the vehicle, what your expectations are and what your used to. I have the 2.3 non SAS, have driven my friends 2.7 non SAS quite a bit and do not see a major difference. On the highway the 2.3 cruises along quite nicely and has never left me wanting more while passing etc.
Moral of the story....buy what you think you will need.
Click to expand...

How about more reviews by auto experts...


Although the four-pot emits a less-than-invigorating thrum and is easier to catch off boost, particularly with the manual, it only gives up 30 horses to the V-6.
CAR and DRIVER


Both engines provide adequate response and low-end torque once geared down in four-low, but the 2.3-liter needs time for the turbo to wind up in daily driving.
HAGERTY

The rest of the transmission's gearing is excessively tall, and we had to change gears later than we normally would lest low revs magnify whatever turbo lag the 2.3-liter engine exhibits. As we charged up the steep inclines that give Texas Hill Country its name, we found we often had to downshift to fifth or fourth to maintain our mile-a-minute pace.
MOTORTREND

The clutch is somewhat vague, which combined with the 2.3's less-predictable throttle tuning made for a rather disappointing experience.
motor1


The 2.3-liter turbo-four seems to have enough grunt on paper, but it felt a bit sluggish in spots, especially when climbing a grade. I found myself downshifting more than I expected to, and it wasn’t until I hit some open highway late in the drive that I found myself using fifth and sixth gears. I wonder how the four-cylinder can handle the extra weight of the four-door – and how it works in concert with the 10-speed, regardless of door count.
The Truth About Cars

The 2.3-liter turbocharged engine definitely needs boost to have any amount of low-end torque. Starting off in first gear, I found myself lugging the engine a bit as the motor began building boost, taking a moment to accelerate out of the hole.
jalopnik

I went with the Bronco my id would want: a loaded, red, two-door Badlands trim model with a seven-speed manual transmission (only available with the smaller but still capable 2.3-liter inline-four engine). It was not the ideal choice for Austin, which was much hillier than I anticipated
GEAR PATROL 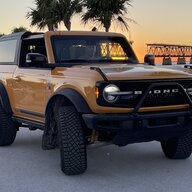 Skeech said:
Do those modifications impact your warranty at all?
Click to expand...

The tuner is a Ford tuner and works with the factory warranty, not sure how the aftermarket leveling kit with the 33’s affect the warranty? 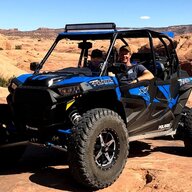 I have fallen in love with the 2.7 engine! It has very good trail manners, tows well and is just a blast to drive. The 2.7 also has multi-port fuel injection to clean the intake valves while the 2.3 does not (which may later add to the expense of owning the 2.3). To each their own but for me, the 2.7 is the right choice!
4-Door Badlands, Velocity Blue, 2.7, MIC with Tow Package
Reservation Date and time: 7/13/2020 at 10:29pm Eastern
Built Date: 6/30/2021
Delivered: 7/21/2021
Advertisement
You must log in or register to reply here.
Share:
Facebook Twitter Reddit Email Link

Is there an unconventional way to get the high package on the Black Diamond or Big Bend?